We took an easy day today. Kurt took the kids to the pool after breakfast and I did a bit of laundry in the sink. Afterwards, Ian played with his LEGO’s and I took Megan to Quarks Internet Cafe in Smelly Alley – otherwise known as Union Street. Last night we walked through the alley and couldn’t figure out the source of the name. It was clean and no graffitti. But this morning with the butcher’s, fish monger’s, and grocer’s open it really did smell. Megan enjoyed seeing all the color and the “old fashioned way” to buy food.

We also met up with Kurt’s UK work mates. They took us to Sweeney & Todd’s Pie Shop, a brisk walk from the hotel. The kids were good sports. Ian wanted a fruit pie, but the best I could do was Pigeon & Peach. He ate the chips and drank his OJ. Megan made a valiant attempt at a Ham & Turkey which looked filled with some kind of cheese. She got a third down and polished off her chips as well. I had a lovely Steak & Stilton (cheese) pie on it’s own and Kurt had a Steak & Mushroom with a side of carrots. The crust was heavenly and all the pies had different crust-cut-out shapes on them to tell them apart.

We then went to Reading Abbey Ruins, apparently a popular hang-out spot for teens on school holiday. The kids have now decided that Henry VIII is the meanest person every because (according to their talley) he broke two churches and killed his wives just for having girls. Funny that the way this trip started was that Ian was crazy about Henry VIII and wanted to see his armour.

One short block brought us to the Reading Museum and an amazing display: a life-size replica of the Bayeux Tapestry stitched 100 years ago. Having been to Battle, the kids enjoyed reading the captions and finding the pictures that matched. They both enjoyed finding the chain mail and looking at the shield shapes. Ian (someone please explain to me) was fascinated with the panel of the dying Edward the Confessor, his funeral, and the double death of King Harold.

Shooed out 10 minutes before closing, we decided to take in an early showing of the film (probably not to come to the US) “Mr. Bean’s Holiday.” It was a great laugh and especially fun for us as we are on holiday in a foreign country, though not hitting near the snags.

And thus I am now officially caught up with our journey so far. Kurt took the kids to McDonald’s for dinner (yes, we finally gave in – but they’ve been good sports) and I had a cup of tea in Smelly Alley. 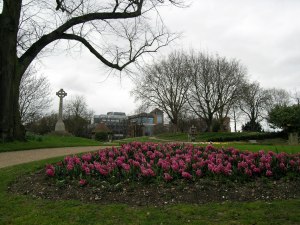 Quote of the Day:

Ian, after studying the Bayeux Tapestry replica, “Where is King Harold’s funeral?” (Ah, war-politics boiled down to a 3rd grade level…)

Megan, at lunch to Kurt’s co-workers, “My favorite food so far is – Mom what do you call that sausage thing?” (Bangers n’ Mash)